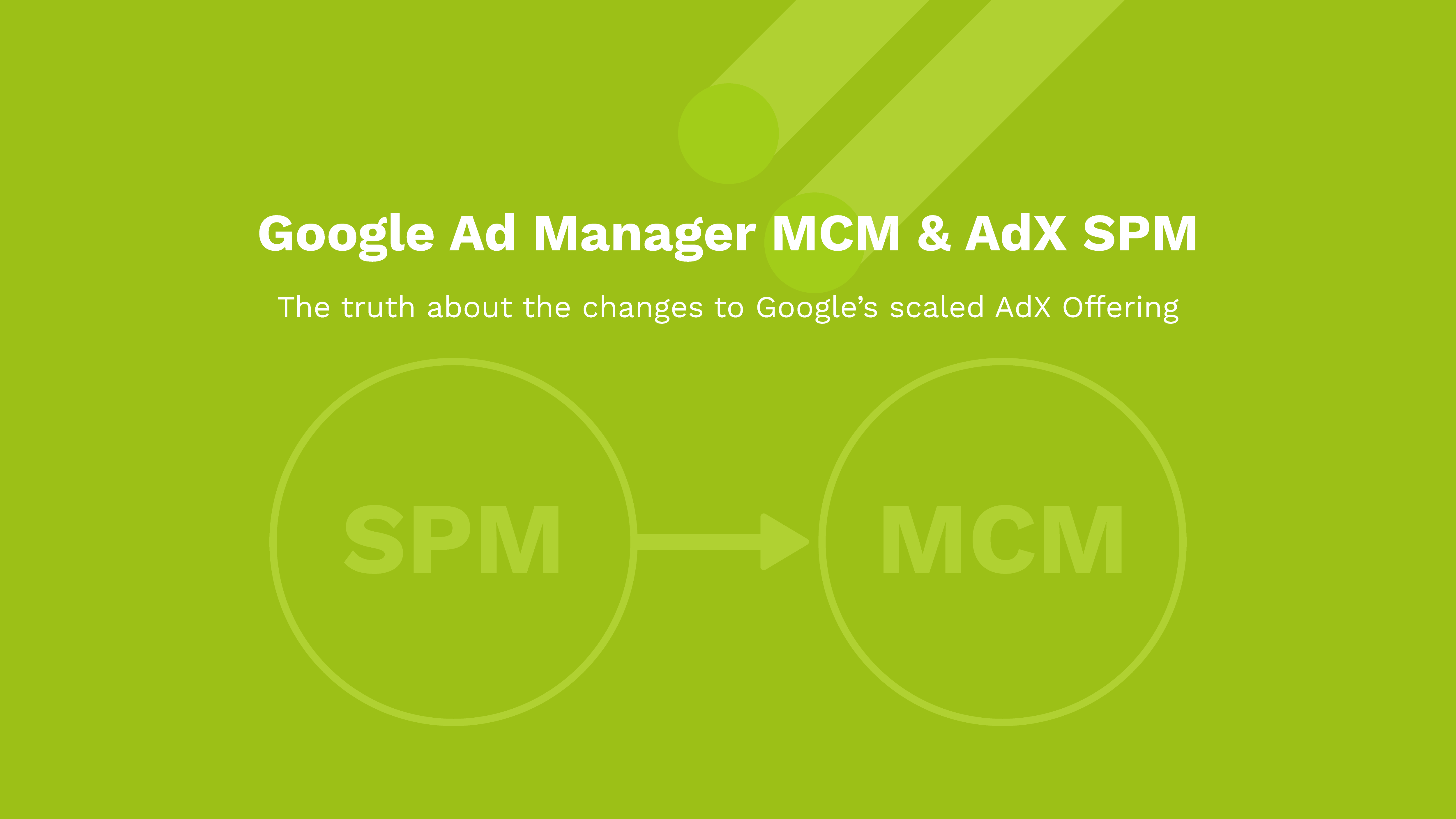 The Truth about the Changes to Google’s Scaled AdX Offering

News that Google will be replacing the AdX SPM program (Scaled Partner Management) this year is finally in the public domain and many publishers are growing concerned at how this might impact their ability to monetize through the Google Ad Exchange. With the rollout of the new Ad Manager MCM product, worries around the retirement of AdX SPM are being worsened by some opportunistic partners spreading alarmist misinformation to encourage publishers to switch providers. The truth is that publishers will still be able to access Google Ad Exchange through trusted partners like OKO [Insticator].

Some things will change, though, and with the official deadline for migrations set to July 2021 it is important the any publisher selling inventory via the Ad Exchange properly understands what those changes are and how it will impact them. As ever, we are here to help.

If you currently use AdX and are not sure if you will still be able to, just contact us. We’ll talk you through the options and how they might affect you specifically.

What is AdX SPM? Does this Affect Me?

SPM and Scaled Partner Management aren’t terms that most publishers are familiar with, but this is how the vast majority of publishers currently access the Google Ad Exchange. If Google pays you directly for your Ad Exchange revenue, and you haven’t already migrated to MCM in the last few months, then you don’t use SPM and this change probably doesn’t affect you. If you access the Ad Exchange through a third-party and they make your payments then you are almost certainly using SPM.

SPM is Google’s “Scaled Partner Management” system. It allows organizations like us that have their own SPM account to provide other publishers with access to Google Ad Exchange.

What is Ad Manager MCM and How Do I Get It?

SPM is being replaced by Google Ad Manager MCM – Multi Client Management. Ad Manager MCM gives partners like us the means to manage monetization for multiple publishers in a way that is efficient, transparent and effective.

Importantly, MCM is native to Google Ad Manager. SPM was always a separate feature built in the past where AdX and Ad Manager were two distinct products. As AdX and GAM have merged to one product, the benefits of everything being under one platform have grown.

MCM – Manage My Inventory
For publishers that don’t have a direct AdX account and don’t want to pay for Ad Manager 360, but want to benefit from features such as Google Ad Exchange and Open Bidding.

Publishers wanting to access AdX through Ad Manager MCM need to talk to a Certified Partner like OKO [Insticator]. Contact us and we will be happy to help!

Why is AdX SPM Being Retired?

SPM is a legacy feature from when Ad Exchange and Google Ad Manager were distinct products. Part of the motivation to replace SPM with MCM is definitely around the benefits and efficiency of maintaining a single platform. One benefit of this to publishers is that features have historically been slow to appear for SPM users (or sometimes have never materialized at all) because of the need to develop for a second platform. With MCM being native this issue should melt away.

More important than efficiency, though, is transparency. The advertising ecosystem is always evolving and one area where there has been a lot of recent change is around the need for transparency (think of initiatives like ads.txt and sellers.json). SPM was never the most transparent of systems. It was very easy to create SPM child accounts with little transparency or  oversight and that has definitely been the subject of abuse. MCM is a big step forward in bringing both transparency and accountability. This is good for the ecosystem as it gives advertisers the confidence to buy ads – which is what we all want.

Change is never easy, but the good news is that the change to MCM does come with some advantages to publishers. Ad Manager MCM is a very new product and, even though we had early beta access, we’ve had limited opportunity to explore some of features. Despite this, it is already clear that MCM offers some advantage over the old SPM product:

MCM is Now a Native Feature of Google Ad Manager

SPM was a bit of an odd leftover from when Ad Exchange was an entirely separate product to Ad Manager. This meant that features were often slow to be added to SPM and sometimes failed to arrive. We’d expect updates to be much more forthcoming now. Features available to those with direct AdX accounts should be far more accessible to those accessing AdX through an MCM partner.

Open Bidding is Google’s server-side auction solution. It allows more SSPs to bid on your inventory without having to add latency through header bidding. Open Bidding is a GAM 360 feature that most publishers historically have not be able to access. By signing up with an MCM partner that has Open Bidding support, publishers can now easily add this powerful benefit to their ad stack.

Publishers using the Manage My Inventory option benefit from the additional programmatic capability of their partners GAM 360 account. That means access to Programmatic Guaranteed and Preferred Deals that have not always been available to all. Both offer great ways of delivery high CPM deals to advertisers.

Who Can Offer MCM?

If, like the vast majority of publishers, you do not have a direct AdX account then you will need to access AdX through a partner. While there has historically been a large number of SPM partners, the number of companies able to offer Ad Exchange access is set to decrease steeply under MCM. This is part of the drive to ensure quality and transparency.

Partners now need to maintain certain standards in order to have access to MCM. These are a less strict version of the Google Certified Publishing Partner criteria, so the simple answer is to look for a GCPP certified partner to work with.

What Happens if My Partners Can’t Offer MCM?

Many existing partners will not meet the criteria for MCM. The inventory quality criteria, in particular, are proving difficult for partners who historically have not maintained the level of quality control now being expected. When SPM is retired those partners will not be able to help their publishers with AdX.

As migration to MCM is not a “one click” process, we advise that every publisher accessing AdX through a third-party check that they have been accepted for MCM. If not, start talking to other partners immediately. We are, of course, happy to have that conversation!

What Happens to My non-AdX Demand?

One advantage of SPM is that it allowed publishers who don’t have AdX to access the Ad Exchange within their own Ad Manager account through use of a partner. This model is currently not planned to be supported once Scaled Partner Management is retired. Publishers will either have to work within a child MCM account or have their GAM account enabled for AdX by Google. GCPP partners may be able to assist with the latter, but Google are now far more restrictive in when they enable AdX and the clear expectation is that the vast majority of publishers will use MCM child accounts if they want to access AdX.

How Difficult is it to Migrate to MCM?

The migration process isn’t too involved, but it is not instant. As part of the migration every publisher and site has to be approved by Google. Officially, that one step can take up to two weeks, but we wouldn’t be surprised to see a backlog when publishers rush to migrate when SPM is retired. Our advice is to have discussions with an MCM partner as early as possible.

If the migration is to “Manage My Inventory” (which most will be) it does also require re-tagging, which can add time.

Please do send us your questions. We actively monitor comments and try to answer most questions. Thank you!

How to Choose an Ad Manager MCM Partner

#Insights
See Blog
This website uses cookies to improve your experience. You can opt-out if you wish.